Little puzzles and enigmas in Licca and her family's life stories have finally been elucidated in a book called "Eien no Licca-chan" (Eternal Licca-chan), which was published in 1992 for Licca's 25th anniversary and seems to be the most complete and reliable source. So here's the definitive version of :

The Phantom of the Kayama 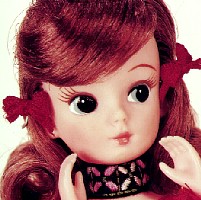 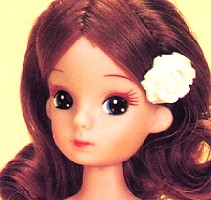 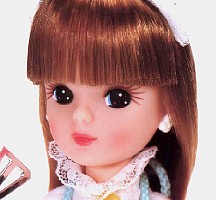 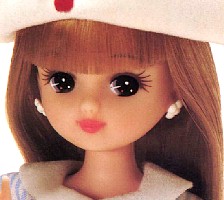 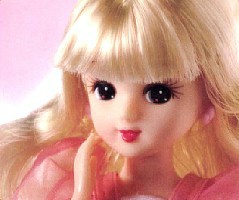 In a way, Licca will be 11 years old for eternity. But as times change and little girls become more ambitious, so Licca, who was supposed at the time of her debut to be a not too bright pupil at school, changes also and eventually becomes a diplomat. Here is Licca's life story as concocted by Takara and revealed to the public on the occasion of her 30th birthday in 1997.

1967 Licca is born on May 3rd to Orie Kayama, a Japanese fashion designer, and Pierre Miramonde, a French musician. It seems that Pierre was so entranced by the beauty of his wife's family name (Kayama can be taken to mean "fragrant mountain") that he adopted it and became "Pierre Kayama Miramonde". In most Licca-chan literature he's identified as "Pierre Kayama"! 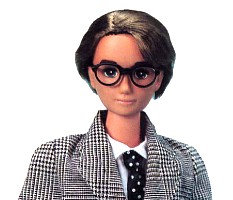 Licca's first "Shichi-go-san". This means "Seven-five-three" and is a traditional ceremony taking place on November 15th; parents take their 3- and 7-years old girls and their 3- and 5-years old boys to the shrine, thank the local divinities and pray for their growing up healthy and strong. At this occasion Licca is very happy because her parents buy her some "Chitose-ame" ("thousand-year-candy") and she gets her picture taken to commemorate the day.

Licca enters kindergarten and makes many friends. She gets especially close to long-haired Izumi. 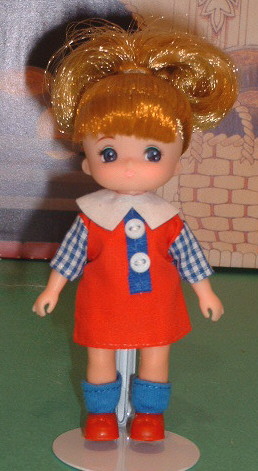 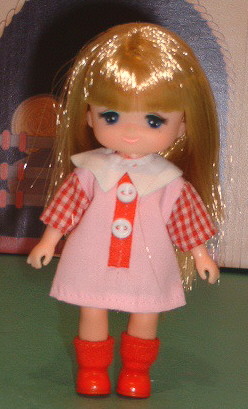 1977 Licca takes first place in a piano competition (she has been studying the piano since the age of 3). Her father is euphoric.

1978 Licca is 11 years old, the age at which we know her as a doll. As a momento of that New Year she gets her picture taken with her 2 bosom friends, Isamu and Izumi. The 3 of them are known as the "Licca-chan trio". 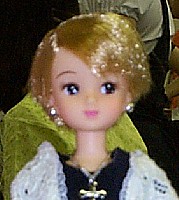 Licca is in her second year at Shirakaba Junior High (in Japan the duration of studies is of 6 years in elementary school, 3 years in junior high and 3 years in high school; the school year is from April to March). She wins the tennis tournament and is elected "Miss Shirakaba" at the school festival.

1984 Licca spends the summer vacation of her second year at Shirakaba High staying with her grand-parents in France. Is it under the influence of her diplomat grand-father that from that time Licca begins to strive towards becoming a diplomat one day. 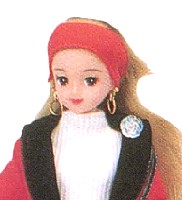 Licca enters university. She studies hard but also joins the university tennis club. Many boys from the club and from other universities whom she meets at competitions ask her for a date, but nobody knows who her favorite is. 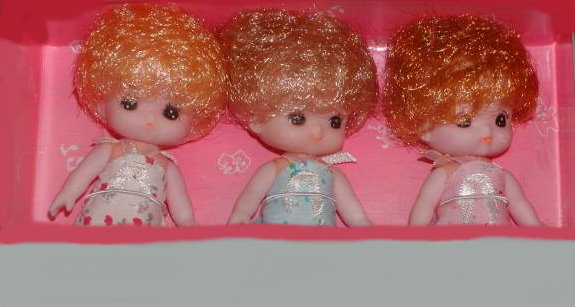 1989 Licca's 4th and final year at university. She fulfills her dream and succeeds at the diplomatic service examination. In the past Licca's father had been away a lot of the time giving performances overseas, but now he's decided to spend more time in Japan and to increase the number of his local concerts.

1990 Licca has graduated from university, broken through barriers and become a member of the diplomatic corps. She's sent to her father's native land, France.

1991 Licca is dating Frantz, who's also a diplomat and who also has a Japanese mother and a French father. 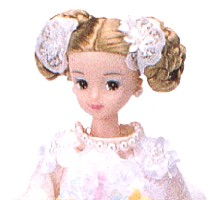 After one year Licca marries Frantz. His family name is written phonetically as "Shibure". Licca decides to keep on working for a while (one would like to think so, after so much studying!).

1994 Anticipating a new addition to the family Licca and her husband move from an apartment to a spacious house.

1996 Licca is expecting. She plans to take a parental leave from work and considers concentrating on her child's education for a while.

Licca and Frantz's first child, a girl, is born on February 11th. Frantz says: "Licca, my dearest wish is to bestow your beautiful name upon our beloved daughter" and so the child is called Licca also. That's all folks! Maybe more in 29 years, for Licca's 60th birthday.

Info from a 1987 booklet: Licca is 142 cm high and weighs 34 kg. She likes tennis, chowchow dogs and baking, her idol is Princess Diana. She wants to be a fashion designer when she grows up (but becomes a diplomat instead) and likes clothes like Akina wears (a singer well-known at the time) . Her favorite colors are pink and white, her favorite manga is Doraemon, her favorite snacks are custard pudding and Haagen-Dazs vanilla ice cream, her favorite band is Shounentai and currently she's mad about SuperMario video games.

Who knew? Through her French father, Licca is actually the descendant of an illustrious royal family. The secret of her birth is now revealed to the wondering public!

Note : in France "Mirene" would usually be written as "Mylene", this name is too recent to be plausible as Licca's great-grandmother's.

Licca's Mother's name is Kayama. Pierre liked the name so much he took it as his surname.

Little tidbits about a few members of the family

Pierre's younger brother Luc is an F1 driver. He first met his wife Therese at a party where he was celebrating his victory. With kittenish Therese he lives as if in a perpetual honeymoon. Therese is the daughter of the president of a car company. She was a successful fashion model, but retired when she fell passionately in love. She's a charming childlike woman so delightful that her whims are always forgiven.

Licca's 11 year old cousin Charles is handsome and clever. Girls are infatuated with him but he doesn't even look at them. When he met his aunt Orie his perception of women changed, and he's also quite fond of Licca.

Charles and his girlfriend Chocolat

Charles has younger twin siblings a brother, Marron and a sister, Creme. 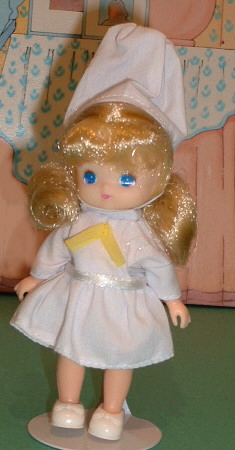 Pierre's younger sister Diane is a freelance writer specializing in animals and nature. When she visited Japan to gather material for her work, she was charmed by its beauty and now lives in Shinshuu. 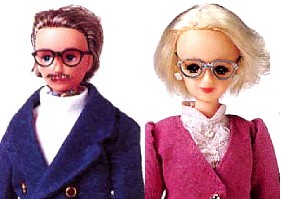 Once upon a time the Miramondes' ancestors where part of a royal family, renowned throughout Europe. Their crest is distinguished by two white swans whose necks create a heart-shape over a banner proclaiming "Virtus, Amor, Honor" and a rose. As a clan tradition, a bangle is presented to each first-born daughter in the family by her grandmother. Licca's bangle is engraved with her birthdate and the words "Licca Kayama Miramonde". (Editor's note : what about Licca's elder sister Rie?) Who's the mysterious air stewardess with a mole on her ear? Why is Licca's elder sister never mentioned? Read on to discover :

The Phantom of the Kayama or What happened to Rie? 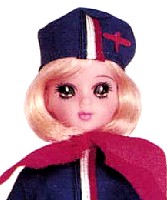 One day, Licca's mother Orie, having won a fashion design contest in Japan, was on her way to France to take part in an international design contest. When she felt sick on the plane, a nice stewardess came to comfort her. As the strangely familiar-looking stewardess was bending over her, Orie noticed a mole on her earlobe, turned paler yet, and asked in a wavering voice : "What...what's your name? Who are you?" "My name is Rie, my father is a French orchestra conductor. My mother is Japanese but for certain reasons at the moment I'm living alone with my father in France." "Rie! My daughter!" "Ma...Mama?" Such was the story that accompanied the release of the Rie doll, sold from 1972 to 1974. It must be said that Orie and her husband Pierre were separated for a while after Licca's birth. Still, I don't see why Orie had to be estranged from her elder daughter! Stranger still, Orie by herself managed to give birth to the twins in 1974, and to the triplets in 1987 (let's draw a chaste veil on how she managed this exactly). Pierre came back to Japan to join his family and made his first appearance as a doll in 1989. Rie was a stewardess on international flights, a sweet girl who liked to paint pictures and write poetry in her spare time. In 1974, the Rie doll was suddenly removed from the market and all mention of her on the back of boxes and booklets disappeared. No explanation was given. What probably happened is that people at Takara realized that she wasn't consistent with the rest of the family. Orie's age at that time wasn't specified, but she had just had the twins when Rie disappeared, and the age gap between her children was certainly becoming conspicuous. Now that Orie and Pierre are supposed to be 33 and 36 (in the current Licca-chan story-line) and have baby triplets, there certainly seems to be no room for a daughter old enough to be an air stewardess! But it is possible that in the dead of night, in very old and dusty toy shops, if you kept a careful watch you'd be able to espy a small half-transparent silhouette, desperately searching all the nooks and corners, looking for her lost family. She's wearing an air stewardess' uniform.

Note: all pictures on this page not taken by myself are from "Licca-chan Perfect Data Catalog".