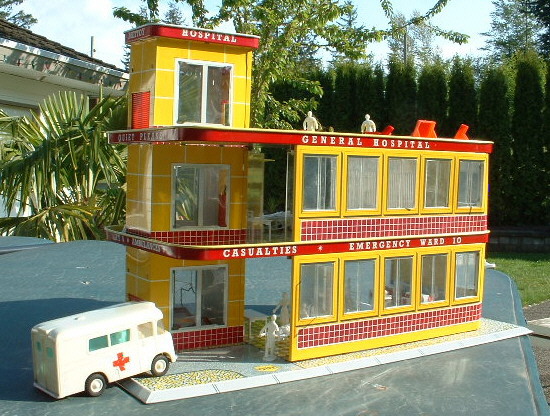 A very rare and hard to find(HTF) piece is the Mettoy General Hospital. It is officially called "Emergency Ward 10" and was produced by the Mettoy company of England in the 1960's. Very few toy companies offered a hospital playset at all, let alone one as detailed as the Mettoy company set. According to all the reference books I have consulted, the set came with 24 people and over 60 pieces of hospital equipment. The set is said to have been based on the British television show, Emergency-Ward 10.

My set was purchsed from a dealer in Tasmania and some of the smaller pieces of furniture were slightly damaged in shipping. Otherwise the set is pristine. The ambulance does not belong to the set. The seller thought it looked nice with the set and so do I!