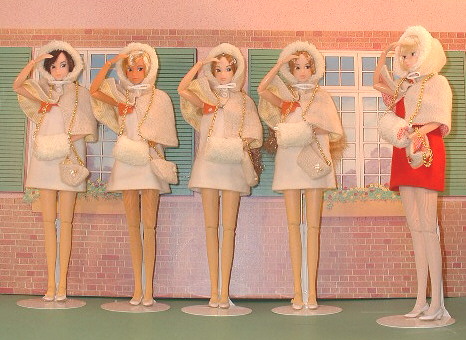 The Momoko Army, marching right into your hearts. Their mission: Shopping!

Momoko at first was a very limited edition fashion doll. Her largest edition prior to 2005 when Sekiguchi took over production was 1400 dolls worldwide, now compare that with another well known fashion icon, Barbie, who regularly has editions of 25,000 to 50,000 dolls. So you can see that Momoko's largest edition falls well below Barbie's regular edition. Therefore Momoko is a very HARD TO FIND doll. A lot of editions are sold only at Doll Shows or only in Japan, so if you are new to collecting Momoko, be prepared to search for her on the secondary market. In August, 2004 PetWORKS (makers of Momoko) announced that they would be shutting down production for a while to rethink Momoko. What they did was to sell the production rights to the Sekiguchi Company. As a result Momoko began production again in the Spring of 2005 with a number of new dolls. All these dolls originally had much larger production numbers and their prices were considerably lower than the original Momokos. Over time, the production numbers have stayed high, making Momoko easier to buy, but the price, has continued climbing and is now for some editions, almost twice the original price. Most Momokos are over $100.00. In 2005 PetWORKS produced a Momoko in collaboration with Sekiguchi. The following year they produced more dolls. These dolls had PetWORKS heads on Sekiguchi bodies. Suddenly there were two sources of Momoko. This double Momoko has continued to the present, with PetWORKS dolls selling, in general, at a higher price.