COLONIAL WITH A REC ROOM, BUT NO BREEZEWAY
COLONIAL HOUSE WITH A UTILITY AND PLAYROOM!!! 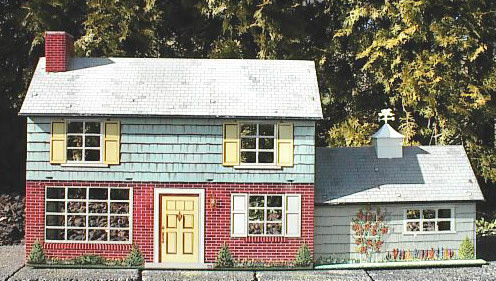 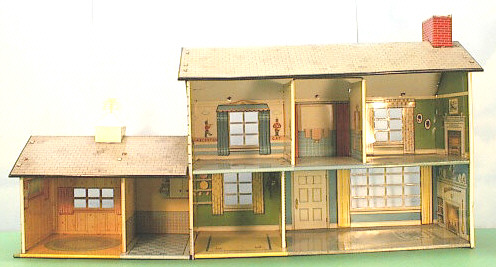 This delightful house had an extra wing on the right side to the house.  This wing contained a rec room as in the houses with a breezeway, but instead of a breezeway there was a laundry room.  The decor of the rec room(sometimes called the Playroom is different from the left side rec rooms). The house was produced in 1964 for Sears and sold  for $4.99. It was offered for only a short period of time in a limited quantity, so you can see why it is so difficult to find.  A variation of this house appeared in the 1964 Sears Christmas Book.

On the inside the configuration of the rooms has changed slightly. Now the master bedroom is on the right hand side of the house and the nursery is on the left. Notice too that the nursery now has the tin soldier motif. On the main floor, the utility or laundry room has become smaller and now there is a playroom/rec room beside it.

A PLAYROOM FOR THE KIDS AND A BREEZEWAY

SOMEWHERE TO PARK THE CAR